The general manager of Terraform Labs, Do Kwon, has admitted that a crash in the price of bitcoin (BTC) would be “negative” for the stability of the stablecoin TerraUSD (UST), but that he expects that bitcoin suba.

Terraform Labs is the entity behind the Terra blockchain platform, which plans to buy a total of USD 3,000 million of BTC as reserve for UST.

Kwon made the comments in an interview on the Unchained podcast on Tuesday. Host Laura Shin asked Kwon what the short-term implications of holding so much BTC would be for the stability of UST.

Kwon said that “the worst case would be if we were buying bitcoin and there was a drop six months later, and it was correlated with a massive drop in demand for UST”, which would be, as he modestly put it, “negative”. However, that scenario doesn’t bother him:

“In a way, I bet the long-term scenario of bitcoin going up and reserves strong enough to withstand UST demand drops is the most likely scenario.”

Kwon has been buying bitcoin to keep it in the Terra treasury as 40% of the UST guarantee. So far, Terra has purchased 30,727.9 BTC and recently purchased 2,943 BTC on Tuesday. This makes Terra the third largest holder of BTC in a single wallet.

YouTuber danku_r argued to his 54,000 followers in a Wednesday tweet that The addition of BTC to Terra’s treasury would help mitigate the impact of a sudden pullback in UST demand. He said the Terra move would help avoid a “death spiral due to market uncertainty” by helping the treasury “swallow the UST supply squeeze”. 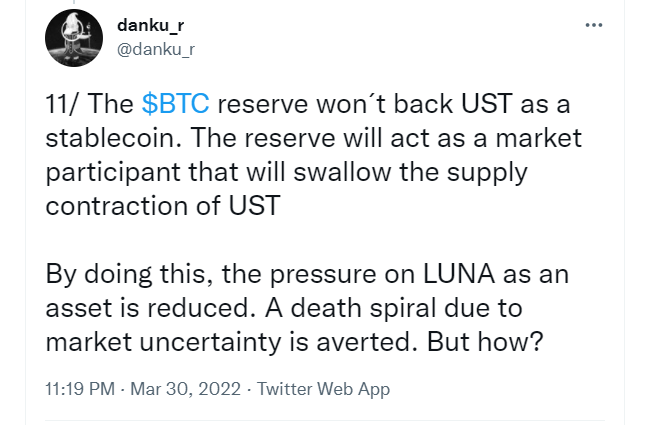 One of Kwon’s stated goals for the treasure, known as the Luna Foundation Guard (LFG), is make Terra “the largest holder of BTC in a single wallet”. To unseat current leader Michael Saylor’s MicroStrategy, Kwon will need to amass more than 125,051 BTC, according to Bitcoin wallet tracker Bitcoin Treasuries.

According to @stablekwon, @terra_money is a layer 2 solution for BTC where “Bitcoin only needs to be good at one thing, being an asset.” What do you think: will Terra be layer 2 for bitcoin?

More Later in the interview, Kwon lived up to his reputation as an instigator by proclaiming that Terra is a layer 2 solution for the Bitcoin network. He argued that, with Terra, bitcoin has a bridge that allows it to be used “across a multitude of applications, from DAOs to NFTs to DeFi.”

“And in terms of expressiveness, transaction capabilities, performance, all those things can happen on Terra.”

Kwon’s comment caught the attention of the cryptocurrency community. In a tweet, Ethereum developer antiprosynthesis responded by asking if all entities using BTC to back a stablecoin should be considered layer 2 solutions. He said: “Even I don’t think Bitcoin standards have collapsed until now. such a point”.

A layer 2 solution helps a layer 1 blockchain scale its operations by moving many transactions to an alternate network to reduce congestion.

Clarification: The information and/or opinions expressed in this article do not necessarily represent the views or editorial line of Cointelegraph. The information set forth herein should not be taken as financial advice or investment recommendation. All investment and commercial movement involve risks and it is the responsibility of each person to do their due research before making an investment decision

Investments in crypto assets are not regulated. They may not be suitable for retail investors and the full amount invested may be lost. The services or products offered are not aimed at or accessible to investors in Spain.